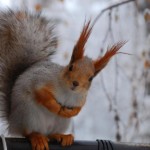 “Mommy, what is that sound? Is it a crazy bird?” Ayla asked me as we came to halt on the short walk home from Nana’s house. Five seconds ago we’d been running and giggling. We stopped short when we heard a sound we had never heard before.

A high-pitched, angry noise, that to my ears seemed like I’d just rear-ended a person with an anger management issue, filled the space around us and drowned out the pretty chirping and tweeting evening songs we are used to hearing. My mind quickly filled in inappropriate words and phrases to supplement the shrieking. Ayla just looked around with a confused expression on her face.

“I’m not sure what that is, but it sounds like it’s right above us. Let’s stand still and see if we hear it again. Maybe we can spot the bird or animal that’s making that noise.”

“Eeek, eek” (imagine a high-pitched sort of banshee-ish sound accompanied by a bit of hissing) was heard almost immediately and we both looked straight up. I didn’t see any birds, couldn’t spot a nest in the pine trees above us.

The sound came again and I squinted. Right when I spotted it, Ayla pointed and said “Mommy, there’s a squirrel up there!”

She was right. On a branch about twenty feet above us was a squirrel. It was perched on the edge of the branch, leaning over and shouting at us. I could almost swear that it had a raised fist punching the air, but that’s probably my imagination exposed to an excess of Disney films with animals that communicate in an all-too human fashion.

Regardless of whether or not the squirrel’s fist was actually in the air, there was no question that it was p-o’d! We had apparently interrupted something very important with all that running and giggling. And the squirrel was letting us know that it was not okay.

We watched it for a short time and then Ayla asked me, “Mom, what should we do?” and raised her hands while shrugging her shoulders with a quizzical look (it is adorable). My response?

“You know, Ayla, when we are confronted with an angry squirrel, I think the best thing to do is to walk away.” And with that she grabbed my hand and we kept going.

But I haven’t been able to stop thinking about that squirrel. And not just because I didn’t even know squirrels could make that noise.

Most of you reading this know that it’s been a long time since I’ve written anything for others to read on a regular basis. I’ve published a few articles in parenting magazines, but it’s not the same as writing something and putting it out there on my own. To be published in a magazine, someone else approves of what I write.

To publish my own words, I approve of what I write.

There is a huge difference.

The voice in my head (you know the one, sometimes we hear it called “monkey-chatter” or “automatic negative thoughts (ANTS)”) speaks to me. It tries to stop me in my tracks with a message of why I should stop thinking about what I want to do. It might not have actual words, but can be a strong feeling. Not good enough, no confidence, no one will ever read this, etc.

My guess is that you have your own version of this.

As we walked away from the squirrel I thought about how life isn’t always so simple. We can’t just get up and walk away from the thoughts we have in our own head. They will still be there.

However, we can get up and do something. When the squirrel starts shrieking that you are being too lazy and should have gone to the gym an hour ago, go for a short walk. Do 100 jumping jacks.

When the squirrel pesters you that you haven’t spent enough time playing with your kids this week, sit down and read them a book or pull out the finger paints and get dirty.

It is through taking action that we quell the shrieking. The shrieking is almost always about something we think we should be doing, or should have done differently. If we want to develop a new habit or routine, we have to take the first step.

And then the squirrel quiets down, curls up in it’s hole, and waits for the next time we need a good kick in the rear. We just have to be willing to listen…or annoyed enough to take action…to walk away.

May I have the time please: 5 steps to joy

Poetry in your pages

Rooster is quiet Fridge and fan my company Words stay, sometimes flee The above original…